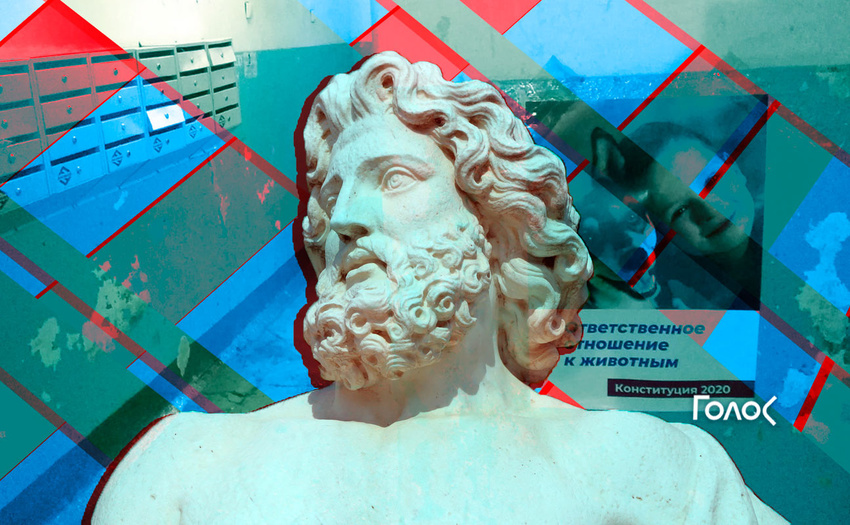 Quod licet Iovi: How the Government engaged in campaigning for constitutional amendments

The "Golos" movement's experts have analysed the campaigning stage of the all-Russian vote for the Constitution. Although the Russian Central Electoral Commission does not claim the absence of campaigning on this particular occasion, it is a fact that it is present. The Constitutional Court has even indicated what rules it should follow and how different from normal informing by the electoral commissions and state institutions it should be.

Although the campaigning stage is not over yet and, according to the law, it did not take place at all, the fact is that campaigning and administrative mobilisation of citizens occurred. And we will attempt to collect and note the main facts and events.

The campaign for the vote on the amendment of the Constitution is taking place on the background of a pandemic that presently doesn't appear to be subsiding. That adds to the limitation of basic rights and freedoms, including freedoms of assembly, movement and pluralism of opinion.

Nevertheless, it has been decided to proceed with the vote and budgetary means were allocated to that end, namely for informing the citizens. However, they weren't used for that; instead that money was used by the Government to run a campaign for amending the Constitution. Such a use of resources is called misallocation and is contrary to the Budgetary Code. The campaign even involved the Central Electoral Commission, an institution that is supposed to arbitrate as the commission organising elections.

For their part, the opponents of the constitutional amendments found themselves unable to carry out any sort of campaign. Apart from the campaign on social networks, that still remains unregulated; that is how online meetings took place on platforms not destined for that – for example with users leaving political comments on “Yandex Maps”.

Apart from that, the carrying out of such a widespread undertaking at the time of an epidemic puts the health of voters and commission members under threat. The measures taken under the pretence of protecting people are in fact merely decorative and even harmful: in practice, they make such a vote very difficult to control; also running competitions, lotteries and other actions that will not only increase participation but will also bring about concentrations of people at the polling stations, is not prohibited by anyone.

All that despite the fact that there is no rational necessity whatsoever to conduct the vote in conditions of "war time".

The all-Russian vote for the amendment of the Russian Constitution is taking place in conditions of a limitation of basic civil freedoms, a lack of guarantees of protection for vote participants' rights, a lack of campaign regulation and a demonstrative ignoring of the principles of political neutrality and non-intervention, not only by the state institutions but also by the electoral commission's systems.

The third report of social monitoring of the all-Russian vote dedicated to the campaigning and administrative mobilisation of citizens. In the main text of the report contains concrete examples of curtailment of the vote’s participants’ rights and the incidents are briefly described. A more in-depth descriptions can be found in the addendum that included the more notable examples.

The lack of the concept of “campaigning” in the law on amendments and order of elections, ratified by the Russian CEC, does not mean that it does not occur as such. Campaigning is as a matter of fact already carried out by different groups. The refusal of the vote’s initiators to have campaigning legally regulated, only feeds the inequality between the capabilities of the supporters and opponents of the amendments. However, the concept of “campaigning” is listed in the stipulations of the Russian Constitutional Court that separates it from objective informing (including in fields unrelated to electoral law). The creation of conditions to provide real pluralism in the societal discussion is, according to the Russian Constitutional Court, a duty of the state. That is the minimal condition for the provision of the free expression of the will.

By not fulfilling the duties of provision of the free expression of the people’s will, that were assigned to it by the Russian Constitutional Court and by the international law, the Russian lawmaker has from the beginning a question mark on the result of the all-Russian vote, whichever it might be.

The conditions necessary for the free expression of the citizens’ will are described in detail in the “Golos” addendum titled “On the universally recognised, international and constitutional standards, applied for evaluating the all-Russian vote on the amendment of the Russian Constitution”. In the short form, these standards are shown in the “Register of the all-Russian vote” – a peculiar “notebook” relating to the safeguarding of the citizens’ rights in the course of the ongoing procedures. It is through the lens of respecting these standards that the “Golos” movement will evaluate the all-Russian vote.

Earlier, the “Golos” movement also prepared an addendum dedicated to the preparatory stage of the campaign for the all-Russian vote for amendments of the Russian Federation’s Constitution.

The all-Russian vote for the amendment of the Constitution is recognised by the Constitutional Court as “a form of direct expression of people’s will”. The Russian Constitutional Court has repeatedly formulated the conditions that must be respected in order for the free will of the people to be expressed; these include: the respect of the basic human rights and freedoms, including freedom of assembly, freedom of movement within the country and freedom of association for political goals; the presence of rules regarding campaign funding, providing financial transparency and freedom of the expression of the will; the presence of conditions for real pluralism of the opinion and of the societal discussion; the political neutrality and non-involvement of the state and of public office holders on duty; the lack of pressure on the partisans of one point of view or the other and on the vote participants in general.