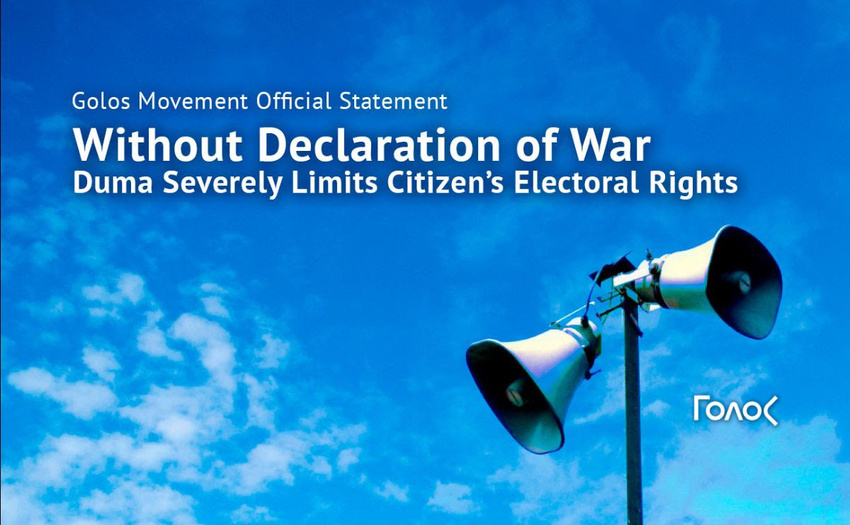 on the new constraints of the electoral rights of citizens

On May 13 2020, the Duma (the lower chamber of the Russian Parliament) hastily passed two bills that significantly limit the electoral rights of citizens, reduce opportunities for public control of elections and referenda, as well as undermine confidence in the results of the voting. The amendments have been adopted without any public discussion.

Though the first set of amendments deals with procedural details, it inflicts severe damage to the institutions of elections.

First, the rules of candidates’ registration through collection of voters’ signatures are tightened up:  the number of invalid or doubtful signatures sufficient for the refusal to register a candidate has been lowered from 10 to 5%. From now on, the voters are obliged to put their first, middle and last names with their own hands on the signature list, in addition to the date and signature itself.

Instead of reducing the excessive number of signatures required to register a candidate in regional and federal elections, legislators propose measures that, taken together, will not widen the opportunities for citizens to participate in elections but will make such participation more difficult. We have to note that these measures are proposed by incumbent parliamentary parties, which are exempt from the collection of signatures, in other words, legislators act not in the interests of citizens, but pursue their own benefit, deliberately creating difficulties in registration for their competitors.

Most of these types have already been tested at elections in Russia and have generated a lot of scandals and complaints, including dissatisfaction on the part of the organizers of the elections. These forms are generally beyond the reach of civic control and are susceptible to fraud and coercion of citizens to vote. The implementation of these forms without simultaneous ensuring of effective oversight will lead to an increased level of public mistrust in elections.

The second set of amendments further limits passive electoral right - the right to be a candidate for a position at a state or local self-government body. The current laws have already introduced non-constitutional prohibitions on the election of citizens previously convicted of grave and extremely grave crimes. Now legislators proposed to extend this ban to convicts of many crimes of medium gravity, including conditionally sentenced citizens. At the same time, the adopted restrictions apply not only to citizens convicted of offenses against person, but also to the convicts of "political" articles (such as "public dissemination of knowingly false socially significant information", "repeated violation of the rules of public assemblies", "public calls for extremism", "calls for separatism", "extremism", "use of violence against a representative of the authority"), and so-called “popular” entrepreneurial articles (fraud, misappropriation or embezzlement), as well as articles on illegal drug trafficking and consumption.

Given the level of accusatory bias in the Russian judicial system, this extension means a direct and deliberate infringement of the electoral rights of several hundred thousand citizens, not only the right to be elected but also the right to elect, because some of Russian citizens find themselves deprived of their right to support candidates of their choice.

The voters in Russia are cable of making independent and responsible choices founded on proper and sufficient information, where the indication of previous convictions of a candidate is already mandatory.  Politicians’ statements that voters need to be protected from the influence of so-called “criminal elements” are derogatory in respect of citizens of Russia, and in fact intended to create a cover for elimination of political competition.

The Golos Movement states that the adopted amendments significantly limit the electoral rights of citizens therefore they violate the Part 2 of Article 55 of the Constitution of the Russian Federation. These amendments are aimed only at the retention of power and are in contradiction with the constitutional purpose of referenda and elections as the supreme direct expression of the power of the people, and diminish the constitutional rights of citizens to elect and to be elected.