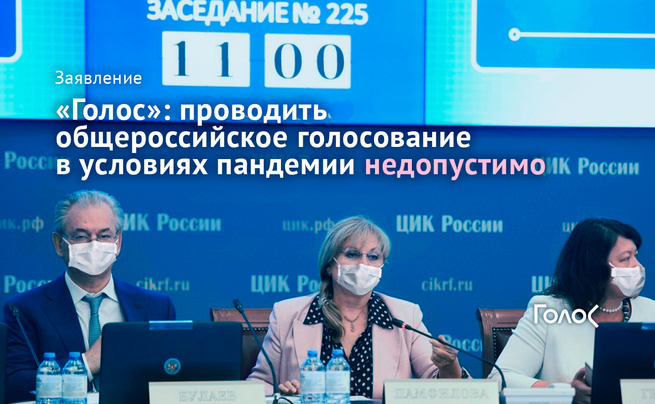 The Golos Movement has repeatedly stated that the significant shortcomings of the procedure of the all-Russian voting to amend the Constitution will not reveal the real people's will. Recently, the situation has deteriorated sharply due to the spread of coronavirus infection in Russia. The authorities have made efforts to limit mass events, which are justified in terms of measures to protect the population but inevitably affect the course of the political campaign. At the same time, the all-Russian voting is also a mass event, and very large. We would not like to believe that the government's desire to "rush" controversial amendments is greater than its concern for the country's population.

The Golos movement is concerned that the all-Russian voting falls during the World Health Organization 's declared COVID-19 coronavirus pandemic.

The spread of coronavirus infection has already begun to affect preparations for voting on amendments to the Constitution of Russia: imposed in different regions of the country prohibitions on the holding of mass events significantly restrict freedom of assembly. This has a negative impact on the ability of citizens to freely campaign both "for" and "against" amendments. Given the already extremely short period that was originally allocated to discuss the most important changes to the Constitution, this makes it almost impossible to identify the real will of people.

Even more serious danger may be posed by the voting process itself, which will create the opposite situation - large swathes of people will be found at polling stations. This can hit commission members, observers and journalists especially hard - all those who will organize voting process and observation. That's over a million people in total. In the current situation such an event constitutes a danger to the health of the nation, which is much more important than the interests of the authors of the amendments.

A large number of voting facilities will be located in educational institutions where classes take place on weekdays, which will also increase the risks of coronavirus infection.

Visits of sick and elderly voters at home by commission members and observers will pose additional threats of infection and spread of the virus, and extending the duration of such voting from one to a few days will only increase the risk of spread of infection.

Also it is planned to open 145 polling stations in different countries including those where mass infection is spread.

Note that Russia is not the only country where the voting day became in doubt because of the infection. Thus, recently coronavirus COVID-19 pandemic has become the reason to postpone or cancel of London mayoral election, a constitutional referendum in Italy and Syrian parliamentary election.

The Golos movement continues to insist that the proposed all-Russian voting will not reveal the real people's will and is a common PR action that, in the sitation of the declared pandemic, is becoming extremely dangerous. We believe that the ideal way would be to cancel the voting and replace it with a real referendum. However, given that article 2 of the Amendment Law has already entered into force, as well as the fact that it does not set a deadline for the appointment of all-Russian voting, the Golos movement calls on the President of Russia to show responsibility for the health of the nation and to refrain from the appointment of all-Russian voting during the pandemic.