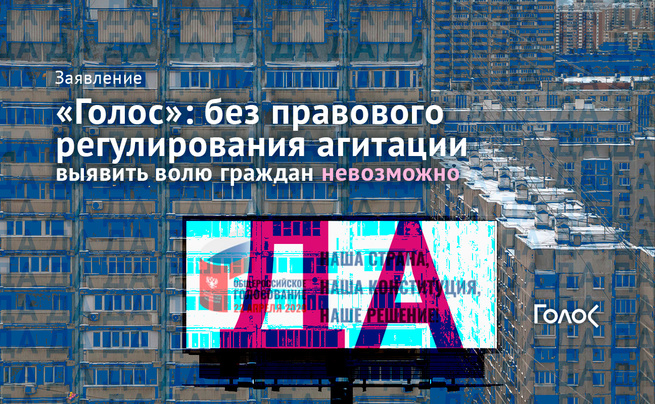 On March 14, the President of Russia signed a law amending the Constitution, which among other things provides the organization of all-Russian voting. Unlike the legislation on elections and referendums, this act does not regulate the agitation "for" or "against" amendments in any way. The law did not include provisions prohibiting the conduct of agitation by authorities and local self-government bodies, state officials and even members of election commissions. There are no guarantees of participation in agitation of citizens of Russia.

Meanwhile, state bodies, state and municipal officials, state media and even election commissions have already launched massive agitation "for" the adoption of amendments. Needless to say they use public (budgetary) resources which were given them by society.

Such agitation makes meaningless the very process of identifying the people’s will. Agitation by the state is a political advertising imposed on citizens at their own expense. That is why both Russian electoral legislation and international electoral standards prohibit participation in agitation by state bodies, as well as officials in the performance of their official duties. The legislation also directly prohibits using for campaigning purposes financial resources not from electoral funds.

In a hurry created the Regulation for all-Russian voting do not contain any of such prohibitions. Also there is no orders that equates the rights of supporters and opponents of voting for the proposed package of completely heterogeneous amendments.

The Golos movement believes that under such circumstances the all-Russian voting will not reveal the voters' will, but also, on the contrary, will create  mistrust of any result and credibility gap to the current government. Since voting is related to amendments to the Constitution, it can have extremely negative consequences for the Russian State under such legal regulation.