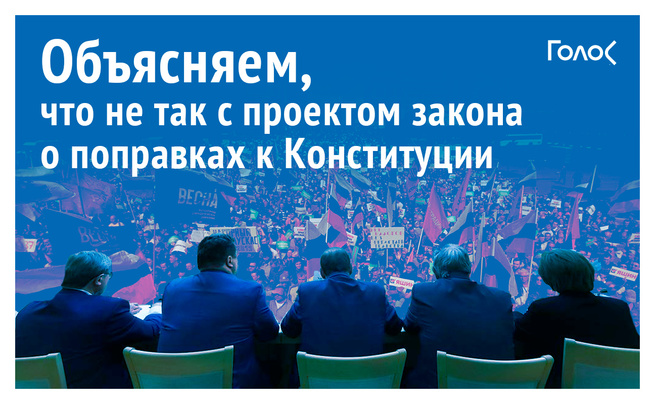 President Vladimir Putin addressed an annual message to the Federal Assembly of the Russian Federation on January 15, 2020. At the end of his speech, he announced a number of proposals to amend the Constitution of Russia, which immediately caused a live discussion.

There is no talk about a referendum at the moment despite the President's statement that citizens of the country should vote for these amendments. Instead, a strange formation has been chosen which is not provided by law, it is related to voting only by presidential decree. It is clear, that such a voting cannot have any legal validity and will only have an advisory nature. That is, there is not a question of adopting amendments in a referendum and of addressing to the people's opinion as a source of power, but only of using some all-Russian voting (or "quasi-referendum") as a political technological and propaganda tool.

Most of the proposals in the message were not specific: phrasings used by President were so unclear that the same proposals could be undergo a 180-degree turn. However, the Golos movement tried to understand what the current President proposes.

We have highlighted several proposals by the President which are in very deed important and could affect the lives of citizens in the near future.

The most important thing is the real destruction of the Supreme and Constitutional Court judges' independence from the President. This actually what is meant by the next proposal: to provide the Federation Council with power to the deprive judges of the Constitutional and Supreme Courts on a submission from President in cases of their commission of offences that defame the honour of the judge and other grounds provided by federal constitutional law." In the circumstances, the proposal to empower the Constitutional Court to verify the constitutionality of the law-in-drafts before their approval, including regional laws and bylaws upon the request of the President, is also not a "strengthening of the Court," as it was stated, but practically a strengthening of the President and the continuation of already excessive centralization.

The proposal, which was stated as strengthening local self-government, was also aimed at centralization. Before saying that the powers of the municipal level should be expanded, Vladimir Putin said that it is necessary to enshrine in the Constitution unified principles of public authority system. Practically, he proposed to integrate local self-government into the vertical power system of governance, which is now declared independent of state authorities in the Constitution. In this case, there will not be an autonomy in decision-making processes even at the lower levels, which will negatively affect the interaction of citizens with the government.

It was also proposed that regional prosecutors be appointed following "consultations" in the Federation Council. Previously they had been appointed after consultation with regional parliaments. Practically that means all prosecutors are removed from the influence of regional elites, and the presidential power to appoint them is even increasing. This is important in conditions when regional elections are becoming increasingly unpredictable. But in the whole Federation Council, only two people - representatives of the relevant subject will be interested in the person of a regional prosecutor. Everyone else will have no business of his candidature, although all these people will make the decision in the issuance. As a result, on the one hand, the members of the Federation Council will not bear any real responsibility for their decisions, and on the other hand, they will easily accept any candidate proposed by the President.

There were two more proposals turned out very important but unclear. The proposals to raise the status of governors and to enshrine into the Constitution provisions about the status and powers of the State Council did not have any specifics at all. It was not said what powers this constitutional authority will have.

The President's statement about the Constitutional provision regarding that the same person could not hold the presidency for more than two terms one after another was even more ambiguous. Vladimir Putin said that he does not consider this issue of principle, "but agrees with it." However, what is he agreed with was not explained. At the same time, we believe that the change of the Constitution should not lead to the "zeroing out" of the presidency terms.

The President proposed several amendments to the Constitution that look like outright populism and do not really change anything. For example, it was proposed to enshrine the provision of law that the minimum wage could not be lower than the minimum living wage. This requirement is already written in the Labour Code. There is similar situation with a very unclear proposal "to enshrine the principles of decent pension provision", because the annual indexation of pensions is carried out on a regular basis. Furthermore the Constitution already contains provisions on the minimum wage (article 37) and on pension provision (article 39), the amounts of which are established by federal law. Generally speaking, it is just the transfer of technical provisions which are already enshrined in the legislation to the Constitution of the country.

The same idea regards to proposals of prohibition of dual citizenship or residence permit for deputies, judges and a number of federal and regional officials. These restrictions already exist in several federal laws. But from voters rights' point of view, they are controversial, as they deprive a number of Russian citizens of eligibility right, and voters are deprived of the right to independently decide whether they want to see a person with a residence permit for another country as their representative in Parliament. In the same context we can consider a proposal to enshrine stricter requirements for presidential candidates - a permanent residence in Russia for 25 years and the absence of foreign citizenship or a residence permit ever. This is an additional tightening of eligibility in Russia. It looks like an absurd that a person who has been educated abroad or worked for a respected scientific or international organization will be deprived of the opportunity to become President of the country by default.

A number of the above-mentioned proposals are only a transfer of those provisions that are already in enshrined in our legislation to the Constitution. One more provision we can call the transfer. It is the most topical and overhyped proposal, which guarantees the primacy of the Constitution over international law.

The main problem with these provisions and all the rhetoric about the priority of national law over international one connecting with the protection of human rights and freedoms is that under color of the human rights, perverting its essence in favor of vested or political interests to hold on to power, it is possible to refuse of compliance with any international obligations of the country. However, practically we see that such opportunities even now exist in Russian legislation.

To be sure, Russia is still implementing almost all decisions of the ECHR and other treaties. The facts of refusal to execute judgements are still isolated. So Russian citizens still have the possibility of protecting against illegal actions of the government.

However, the logic of the authorities seems strange in this case, because "international" does not mean "foreign". Russia is a part of the international community and participates in the drafting of provisions of international law. No international treaty or agreement is valid in Russia without the approval of the state agencies of Russia - Parliament and President.

A number of proposals are purely artificial, although they sound loud in the current political regime.

For example, it is proposed to give Parliament the right to approve the nominee of Prime Minister of the Russian Federation, and then upon his presentation to approve Vice-Prime Ministers and Ministers. But even now the president should approve the nominee of the Prime Minister in the State Duma. The only difference is that ministers are now appointed by the President. But it is clear that having nominated the Chief Executive, the President agrees with him all ministers in advance, and the State Duma today is non-independent in Russia. At the same time, the President retains the right to dismiss both the Government and individual ministers and the right to appoint ministers of the national security, defence and law enforcement agencies independently, although a there was a mention about the need for "consultations" with the Federation Council. But the consultations are not essential for the President.